The effect of computer mouse weight on target acquisition

Over the past decade, advances in sports science and their application to esports has narrowed the difference in performance among top level athletes. As a ceiling is reached, further performance improvements require shifting attention towards the optimization of the equipment used by athletes during competition. Such precedents have long been established in traditional sports, most notably the introduction of the “sharkskin” swimsuits to enhance performance in competitive swimming, leading to 108 new world records in 2018. However, it has also been found that in order to observe a performance difference, the equipment must be perceived by the user as being distinct from what was used previously.

Objective: The objective of this study was to examine the impact of esports peripheral characteristics on gaming performance. Specifically, we examined the role that mouse weight had on performance of a common FPS skill, flicking. We hypothesized that participants would react more quickly and accurately to targets when using lighter mouse.

Methods: To test the perceptual judgement of mouse weight, participants were presented with a pseudo-random order of 5 mice weighing 50g, 55g, 60g, 65g, and 70g, and were asked to place them in order of increasing weight. To establish the effect of mouse weight on gaming performance, 72 PC gamers used 4 different weights (50 gram, 60 gram, 90 gram and 100 gram) of prototype Logitech™ mice to perform a “flick” task, where response time, accuracy and precision were recorded. Mice were presented in a pseudo-randomised manner, with each participant using each weight of mouse with both a locked sensitivity (700 DPI) an unlocked sensitivity (chosen by the participant, M=1200).

Significance: This study provides some of the first quantifiable performance outcomes from esports peripheral experimentation. In finding that performance was inferior when using the 100g mouse (a weight common among commercially sold gaming mice), we show that players may stand to gain benefits from using lighter mice. Moreover, that flick performance was superior in the locked condition corroborates anecdotal evidence that lower sensitivity can facilitate FPS targeting performance. The identification of performance differences depending on target location demonstrates that motor control of extension-based movements of the mouse appear to be easier to accomplish accurately and precisely compared to mouse movements requiring flexion and or adduction arm and hand movements.

Eoin Conroy is a 26-year-old researcher currently working in the Esports Science Research Lab in the University of Limerick in Ireland. Eoin completed his undergraduate degree in Applied Psychology from University College Cork in 2016 and went on to study Sports & Exercise Psychology as a postgraduate at the University of Roehampton, graduating in 2018. Eoin has had a life-long passion for competitive video gaming, having followed the professional League of Legends scene since the inception of the official professional leagues. The unique combination of academic training and personal interests have positioned Eoin as one of the foremost up-and-coming esports researchers, having worked multiple times in collaboration with Riot Games. Eoin hopes to complete a PhD in the coming years and looks forward to cementing himself as synonymous with the topic of esports science research.
Twitter

After completing his PhD in Neurophysiology and Biomechanics at the University of Guelph, Canada, Adam's journey into esports led him to Ireland, where he joined a SFI-funded project investigating the skillsets that make up elite esports players. In the 4 years since, Adam and Dr. Mark Campbell have grown the lab's capabilities and now manage a team of researchers in the first bespoke esports research lab in Europe, where the team's interests range anywhere from the biomechanic and neurocognitive attributes that contribute to the health and performance of esports athletes.
Twitter 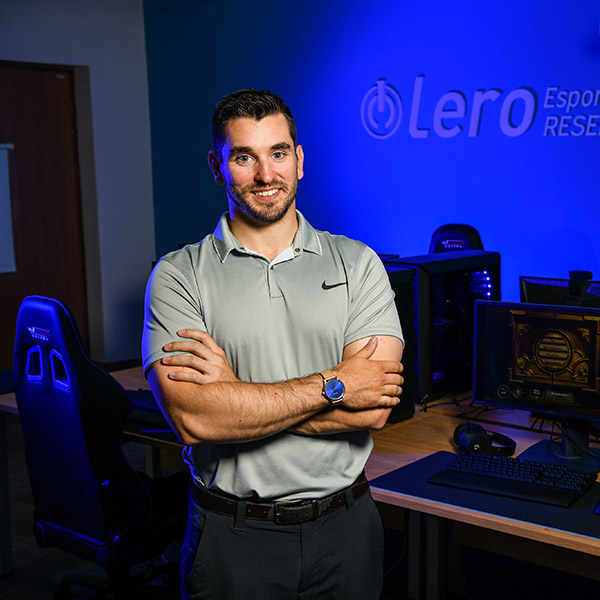